Russians, Poles and Germans on their relations and the Russia-Ukraine conflict

Support for the Russians for their direct involvement in the conflict in Ukraine is negligible. According to the latest research, carried out by the  Institute of Public Affairs and the Bertelsmann Stiftung in Russia, Poland and Germany the Russians don't want to exacerbate the ongoing crisis. This results show that, just as states the myth, both Poles and Germans assess the Russia-Ukraine conflict differently.

A clear majority of Russians is against military support for the Pro-Russian separatists in Eastern Ukraine by Russia. 69% of the Russians, who believe that their country should be in some way involved in the ongoing conflict in Ukraine, state that they do not wish to send Russian troops to Ukraine. "The biggest group of Russians hope that Russia will behave neutrally and not engaged in any of these activities. Only a small percentage of the respondents who are in favor of Russia's support for the Pro-Russian separatists, are in favor of Russia sending troops to Ukraine”, said Lukasz Wenerski, an ISP expert for Eastern Policy during the presentation of the results on April 16. Only 7% of Russians are in favor of fighting, this includes any direct participation of Russian troops.
"This is clear, at least indirectly – the Russian Government officially denies the participation of its troops in combat in the area of Donbas – and in so they are negating the aggressive policy of the Kremlin, which shades a different light on the belief that the actions of President Vladimir Putin enjoy absolute support of vast majority of Russian society, and may be a source of hope that Russia and the West are not doomed to conflict.", explained Jacek Kucharczyk, President of ISP, commenting on the results of the survey. Furthermore, this study shows  that the Russians rather badly evaluate the relations of their country with Poland and Germany.
Moreover, the study, carried out in Poland and Germany,  allows everyone to assess the prevailing opinion that Eastern policy is dividing both countries again. Poles and Germans are looking in the same direction towards Russia. They are unanimous in assessing that their country's relations with Russia are bad.  This was stated by more than two-thirds of respondents (78%) in both countries. Both societies are noticing also a significant deterioration of the relationship with Russia.
Respondents in both countries have also agreed  that it is not Ukraine alone who is responsible for the conflict. While the Poles, however, blame mainly Russia (61%) as the responsible ones for the crisis Germans are rather divided in their opinions.  A comparable group (39%) recognizes the responsibility on the Russian side whereas another group (43%) holds both sides , Russia and Ukraine, responsible.
"Out of very negative historical experiences Poles fear the Russian military as a threat to Poland", described the research Dr. Agnieszka Łada, Head of the European Programme of the Institute of Public Affairs. The results of the opinion polls show that this is perceived by 78% of Poles but only by 41% of Germans.
The conclusions of the study show that in both countries there is no support for the ease of sanctions  against Russia. The majority of Poles and Germans is considered to be in favor of one of two outcomes: either to strengthen sanctions, or maintaining them as they are. In Germany, however, the percentage of respondents who are in favor of a strengthening and the percentage of respondents who are in favor of easing up the sanction is exactly the same (23%) when in Poland five times more respondents would prefer a strengthening of sanctions compared to easing them up.
Despite the fact that both societies are not willing to support Ukraine if it would mean the deterioration of relations with Russia, Germany and Poland want to support Ukraine economically (up 56% and 55%). But neither Poles nor Germans do want to send military support (against it is 56% of the interviewed poles and 82% of the Germans). "This is a clear signal that both societies don't want to exacerbate the confrontation with Russia," commented Kucharczyk.
Joachim Fritz-Vannahme, director of the Program of Europe’s future, Bertelsmann Stiftung  stressed: “Both populations, Germans and Poles, disagree in various points, but there is also a great amount of agreement. Governments in Berlin and Warsaw ought to take this into consideration in their policy towards Russia. Poles and Germans share many interests, they support the same policies, though to varying degrees. Poland and Germany might, based on this, become the drivers of a European policy vis-à-vis Russia.”
"Identical polls carried out in both countries dispelled myths that accrued in recent months, that Poles and Germans would be assessing this conflict very differently." explained Łada. "Such false perception are encouraged by selected media relations that deliver incomplete information, and consequently often create a false picture of the position of the Government and society of a neighboring country." According to Łada, studies indicate, however, many similarities. "Of course, the responses are not always identical, in some cases they even  vary considerably. But these differences can be explained. Let us not condemn that some different views were to be dramatically far apart and rather concentrate on how all these similar reviews can be used in cooperation to overcome conflicts and to promote Ukraine ", encouraged Agnieszka Łada. 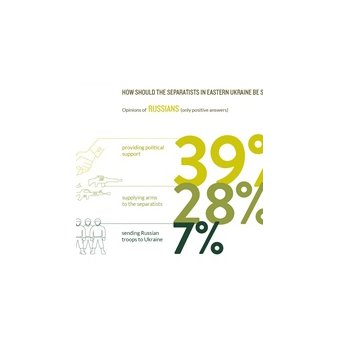