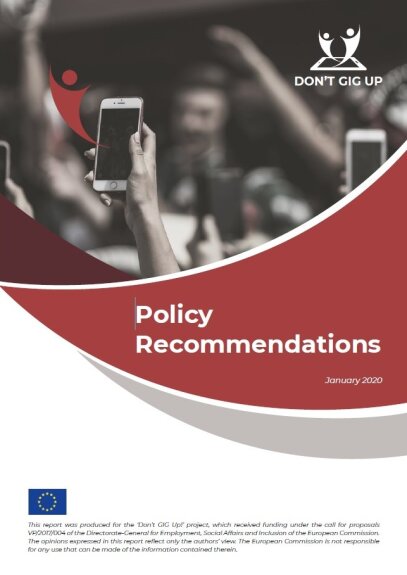 Download
The Policy Recommendations are meant to improve the working conditions and social protection of gig workers and propose measures to be taken by policy makers on EU and national levels, by local authorities, and by social partners.

They were developed as part of  the ‘Don’t GIG up!’ project in which trade unions and research centres to analysed  the features and challenges of the gig economy in Germany, France, Italy, Poland, Spain, and Sweden.

The focus of the project was on work carried out through labour platforms. For the purpose of analysis, such platforms were divided into four groups according to their core activities, namely: passenger transport services (e.g. Uber and Lift); good delivery services (e.g. Deliveroo and Foodora); ‘traditional’ gigs like gardening, cleaning, or skilled services (e.g. Task Rabbit, Helpling, Fiverr, and Upwork); and micro-tasks often externalised to a ‘crowd’ of workers (e.g. Amazon Mechanical Turk).

The project reviewed the state of the art on gig economy, investigated and assessed practices meant to improve the rights and social protection of gig workers in  five National Case Study Reports. Three mutual learning workshops were held comparing and discussing the practices with project participants and external experts and stakeholders. Drawing upon the outcomes of those activities the project partners prepared the Final Report, comparing platform business models and existing initiatives to protect gig workers, and  developed these Policy Recommendations.

The recommendations were grouped according to three core dimensions:
individual contracts and policies against misclassification of gig workers;
gig workers’ activities, and promotion of fair pay and price-setting systems;
andunions’ strategies and functions vis-à-vis platforms’ strategies.

The scope of the recommendations concerns labour platforms as covered during the study. Despite research highlighted poor availability of data and policy measures concerning micro-tasks platforms, most recommendations may apply also to this category.

In the light of the differences between the various types of platforms as well as in the country features, the recommendations shall be intended as general suggestions to be adjusted according to the relevant context. They are sometimes complemented with examples of acts, rulings, or initiatives deemed of particular interest.

The project was co-funded by the Directorate-General for Employment, Social Affairs and Inclusion of the European Commission.