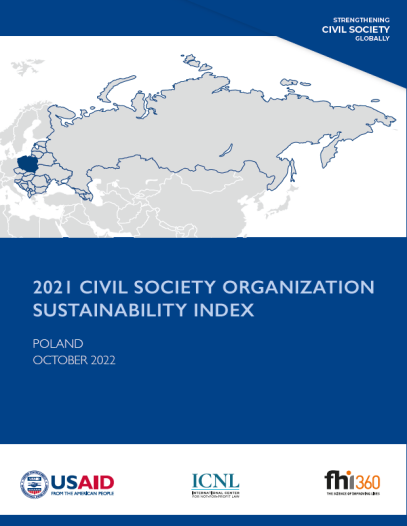 In the subsequent edition of the annual CSO Sustainability Index report for Poland we note that in 2021 CSOs in the country continued to be affected by the COVID-19 pandemic and the extraordinary legal measures adopted to mitigate its effects. Although CSOs quickly reorganized their work to respond to new social needs emerging over the past two years, they were heavily affected by the pandemic and received little public support.

Many had to suspend their activities or close down altogether, and many of those that remained active found it difficult to access public funding or participate in decision making and dialogue with the authorities. Moreover, many activists faced violent reactions from the police and others when trying to exercise their constitutional rights, including the right to public expression and protest. As a result of these difficult conditions, psychological distress and burnout has increased among people involved in the CSO sector.

In the second half of the year, CSOs again demonstrated their agility in response to the humanitarian crisis on the Polish-Belarusian border caused when Belarusian authorities brought migrants, primarily from the Middle East, to the border and effectively pushed them across. Aid, migration, and human rights organizations, in cooperation with a network of activists, quickly organized a system of assistance for the thousands of refugees who were trapped at the border. However, this work was hampered when the president, at the request of the prime minister, declared a state of emergency in the border zone that prevented media and CSO activists from entering the area. CSOs and journalists who tried to help the refugees despite the restrictions met with violent reactions from uniformed services, including arrests and searches. At the end of the year, the state of emergency in the border zone became permanent through the passage of an ordinary law.

Parliamentarians in the ruling coalition continued to verbally attack certain organizations. These groups were also deprived of access to public funding, which was increasingly redirected by those in power to entities close to them ideologically. The government also failed to listen to CSOs’ opinions on bills affecting the sector and used state institutions, primarily the prosecution and police, to harass activists and organizations that criticized its work. Regardless, CSOs were able to demonstrate their strength by organizing several important and publicly recognized coalitions and networking with different constituencies, including local governments, employers, trade unions, and informal groups. This allowed CSOs to increase public recognition of their work and attract funds from individual donors.

For further details read the full report for Poland published here and for comparative analysis with other countries in the region and beyond check the website https://csosi.org/.