We discussed the economic costs and benefits of migration

Europe reacts too late and reacts to the challenges of migration. Meanwhile, immigration is beneficial for labor markets. Its costs will be lower, and the profits will be higher if the actions to prepare a given country or the entire European Union are taken in advance - we discussed these and other issues during a debate held on 14 February at the Embassy of the Kingdom of the Netherlands as part of the cycle " Questions about Europe "of the Institute of Public Affairs and the Friedrich Ebert Foundation and as part of the coalition of NIEM.

Participants in the debate agreed that the response to the challenges of migration came too late for Europe. Moreover, the events of recent years could have been predicted and it was possible to be prepared for them. However, Europeans are now reacting rather than responding to challenges. There is a lack of vision in Europe, vision of what we want in this area and how we can organize the integration process of migrants well. As an example, Australia was given, knowing that in a short time it would run out of doctors, strengthened medical education and encouraged to study young people from abroad.

The topic of integration, however, combines many issues, not only employment, but also education, participation in the local community, access to health care.

Thorsten Klute, former minister for European affairs and integration of the largest German state, North Rhine-Westphalia, and currently representing the Workers' Welfare Association, showed how for years Germany was unable to adequately prepare for the influx of migrants. In the post-war years, Turks and Italians were treated as people who will stay only a few years, supporting the labor market only temporarily - hence their name "Gastarbeiters" - "hospitable workers". It effected in lack of investment in integration. For example, separate classes were created for their children, with a view to their quick return to their homeland and the need to continue education in their country. The effects of the lack of integration policy at this time Germany are still feeling today. It is worth for Poland to make use of this experience and not to make mistakes with regard to migrants coming from Ukraine. For this purpose, it should be possible to integrate well in school, kindergarten and open the possibility of obtaining a second citizenship so that immigrants feel part of society.

Meanwhile, myths are growing around migration. Elena Sánchez-Montijano from CIDOB - Barcelona Center for International Affairs from Spain reminded that migration is mentioned in the Eurobarometer by the surveyed Europeans as one of the most important challenges. Paweł Kaczmarczyk from the Center of Migration Research pointed out that, especially in Poland, the subject of migration is very much connected with the issue of security. The issue of economic and social benefits is omitted here. The cost of admitting migrants is also dominating. An example is the discussion before the referendum on Brexit, when it was claimed in the islands that Poles are too expensive for Great Britain. Meanwhile, research shows that they are contributing their taxes to the British budget. As Kaczmarczyk noted, in general the percentage of migrants in society is overstated. There is too little knowledge about people with migration roots, in Poland too little is known about Ukrainian migrants.

According to Thornen Klute, it was similar in reference to migrants in Germany and still it is, especially in the eastern states, where fewer and fewer people came, hence the experience of co-functioning with foreigners is small. Fear causes that despite the excellent economic situation, citizens are afraid of losing stability, work and the existing standard of living. These fears are based on populists who increase their concerns  about migrants, focusing on the costs of accepting people from abroad rather than on benefits.

The panelists agreed that migrants cannot be stopped in a place where a given country would like to, because they will go to places where there are higher standards of living or where their relatives already live. Hence, according to Sayaki Osanami Törngren from the University of Malmö in Sweden, it is worth investing in an effective labor market, giving you the opportunity to earn a good income. Forcing you to stay in a particular place will not be effective and is the wrong answer to the challenge of migration.

The debate was moderated by Roman Imielski from the Gazeta Wyborcza daily newspaper. The event was organized in hospitable thresholds of the Embassy of the Kingdom of the Netherlands in Warsaw and with the support of the Embassy of Sweden. 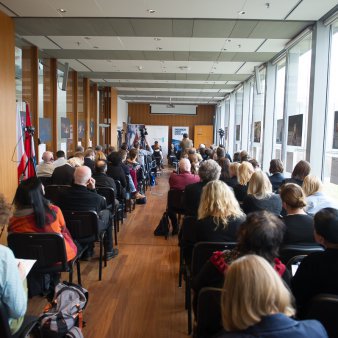