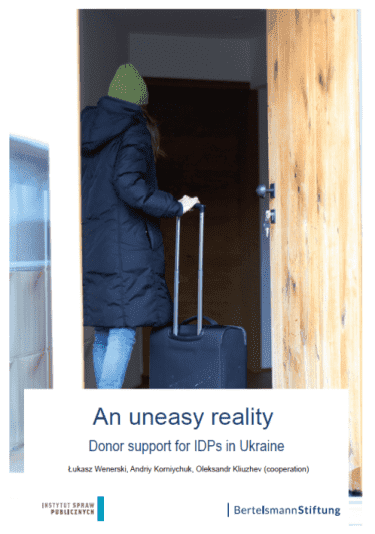 An uneasy reality. Donor support for IDP’s in Ukraine

According to international organizations, since the annexation of Crimea and the beginning of the war in Donbas, internal migrations might have affected from two to three million people. From Crimea and Donbas alone, 1.5 million Ukrainian citizens had to change their place of residence. Concerns that these internally displaced persons (IDPs) will become “Ukraine’s lost generation” have been voiced. A considerable number of Ukrainian citizens affected by the war in eastern Ukraine have started to look for either international protection on the territory of the EU or possible ways to pursue economic migration. Taking into account the unresolved refugee crisis in Europe, the international community has a particular interest in making sure the situation in Ukraine does not get out of hand. In this regard, the effectiveness of the assistance to the Ukrainian state and its civil society provided by international donors is of paramount importance.

Whereas the migration crisis has revealed new challenges faced by the Ukrainian state as it is undergoing the process of reform, it has also contributed to an increase in the public activity of Ukrainian citizens. Some of the most active IDPs have managed to find their place in the new reality (within the country or outside Ukraine), however, many have failed to cope with the displacement and are still struggling with huge economic and social problems.
In some places, basic humanitarian aid is still required, yet IDPs today generally face other problems, most frequently difficulties in finding a job and the lack of proper housing. There are several reasons for IDPs’ critical situation on the labor market: the unfavorable condition of the Ukrainian economy, skills that do not fit the Ukrainian economy (a consequence of the fact that Donbas was dominated by heavy industry and the mining industry, in particular), and sometimes the inactivity of the displaced people themselves (an effect of living many years under non-democratic rule in the region).

This paper aims at analyzing the socio-economic reality of IDPs in Ukraine as well as the state’s response to their challenges from the perspective of the IDP community. In addition, it presents how Ukrainian NGOs assess donor support for IDPs and what Ukrainian civil society expects from the international community in those areas where assistance is needed most.