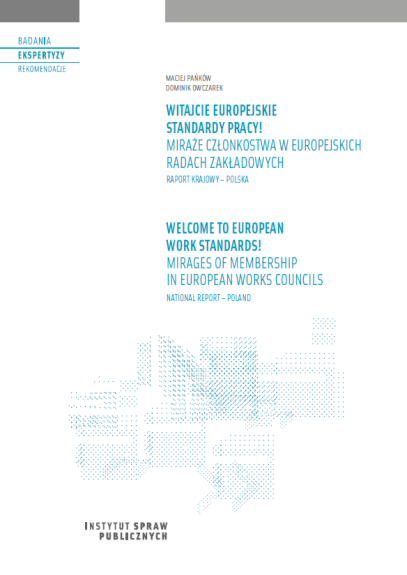 The report is devoted to the functioning of European Works Councils (EWCs) in Community-scale corporations in which Polish employees have their representatives.


It presents the results of a study conducted in Poland in the second half of 2020, including an analysis of the literature and legal acts regulating the operation of EWCs, as well as individual and group interviews with trade union representatives being members of councils, representatives of employers and experts.

The study shows a complex picture of social dialogue at the international level, and the assessment of the functioning of the EWCs themselves is not unambiguous. On the one hand, in the opinion of many trade unions representatives, participation in them strengthens the position of Polish employee representatives vis-à-vis local managers and enables them to obtain in advance valuable information on planned transformations in corporations that may affect the situation of employees in Polish branches. It also fosters the development of a culture of social dialogue at the company level, teaches trade unionists how to effectively participate in it, and allows them to gain a broader view of the company's functioning in the international dimension and disseminate foreign good practices in the field of industrial relations.

On the other hand, EWCs can be a source of disappointment, especially for those trade union members who hoped for them to equalise employment standards between branches located in Western Europe and the new Member States, conduct international collective bargaining or address local ills by trying to bring them to the council's agenda in the face of the weakness of social dialogue at the national level. Also, representatives of employees from different countries are not always able to achieve cross-border solidarity in their relations with the employer.

The report was developed as part of the international research project 'Improving the equality and level of the representation of employees through organisational assimilation and the efficient use of the EWC instrument by parties interested in industrial relations', co-financed by the European Commission. The aim of the project is to promote European Works Councils (EWCs) among employees and trade union members in Community-scale undertakings, in which, in accordance with EU legislation, these consultation and information bodies may be established.