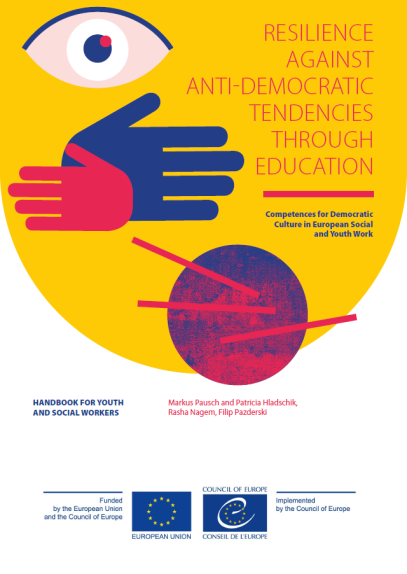 Resilience Against Anti-Democratic Tendencies through Education. Competences for Democratic Culture in European Social and Youth Work.

Download
Since the beginning of the millennium, democracy around the world has been confronted with extraordinary challenges. The number of democratic states has been declining since 2005, and even within established democracies, their quality is declining (as observed by Freedom House, 2019). Many countries face anti-democratic, authoritarian tendencies.

In order to respond such developments, in this handbook we focus on competences for democracy and thus on how to prevent and avoid anti-democratic phenomena like authoritarianism, violent radicalisation, extremism, hate speech or conspiracy theories. This material contains a set of new or refreshed educational methods, tailored to work specifically with social workers and youth workers. All of them should help them prepare to counter these tendencies.

Material is available in English, French, German (all 3 versions above) and Polish (HERE).

Handbook was developed in the project "Resilience through Education for Democratic Citizenship" (REDE), implemented in the programme "Democratic and Inclusive School Culture in Operation" (DISCO) of the European Commission and the Council of Europe.