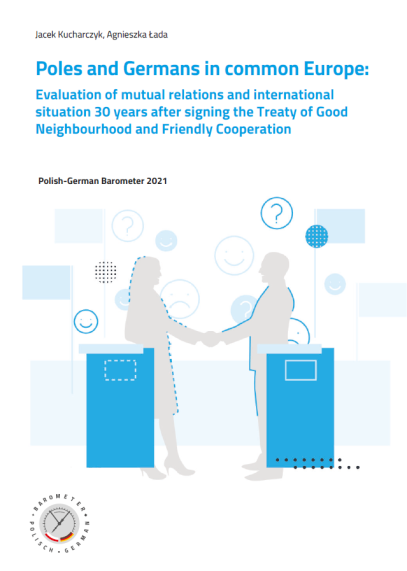 Poles and Germans in common Europe: Evaluation of mutual relations and international situation 30 years after signing the Treaty of Good Neighbourhood and Friendly Cooperation. Polish-German Barometer 2021

Poles and Germans in common Europe: Evaluation of mutual relations and international situation 30 years after signing the Treaty of Good Neighbourhood and Friendly Cooperation. Polish-German Barometer 2021 in English!

The years 2020-2021 will probably be remembered as a period when most spheres of life were dominated by the coronavirus pandemic. The same was true about Polish-German relations. Difficulties in crossing the border for people working on the other side connected with the obligation to undergo quarantine or testing, the temporary suspension of supply chains because of the border closure in the spring of 2020, the virtually complete suspension of the personal encounters that form the structure of city and regional partnerships or youth exchanges, the severe restriction of tourist travel to the neighbouring country – these are just a few examples of the obstacles and changes that have affected these relations. On the other hand, further political developments have taken place, and Polish-German economic cooperation has continued to grow – in 2020, Poland ranked fifth among Germany's most important trading partners. During this difficult time, the trade volume between the two countries broke another record and reached 122.9 billion EUR. Other topics, known from previous years, have also been present in the public discourse, such as the construction of the Nord Stream 2 gas pipeline, the threat to Europe posed by Russia and China, the strengthening of the European economy, the restructuring of the relations between the European Union and the United States, or the commemoration of Poland's suffering during World War II. Most of these areas saw dynamic changes taking place simultaneously in 2020. The construction of Nord Stream 2 was not pursued for some time due to U.S. sanctions. The poisoning of Alexei Navalny by the Russian security services again raised the question of the limits to cooperation with Moscow. The US presidential election changed the setting for transatlantic relations. Due to the economic impact of the pandemic, the question of the innovation and competitiveness of the European economy has taken on new importance. Finally, in the autumn of 2020, the Bundestag passed a resolution obliging the German government to create a memorial for Polish victims and a place for meetings in the center of Berlin. All of this was taking place at the same time as Poland's presidential election campaign in the first half and the German presidency of the Council of the European Union in the second half of 2020. All these events may have influenced the public’s perceptions of the neighbouring country and their mutual relations.
The year 2021 marks the 30th anniversary of the Treaty of Good Neighbourship and Friendly Cooperation between Poland and the Federal Republic of Germany of 17 June 1991, which further emphasizes the importance of questions about the condition of Polish-German relations. That is why it was particularly important to conduct this edition of the Polish-German Barometer survey in this anniversary year. For many years now, this representative public opinion poll has been making it possible to see how Poles and Germans assess each other’s country, its society and their bilateral relations. In 2021, in view of the previously mentioned events, we decided to focus our analyses on some of their aspects – on European policies and global issues, in addition to the assessment of bilateral relations.

• Both the Polish and German publics have a positive view of current Polish-German relations. Sixty-five percent of Poles and 57% of Germans describe them as good or rather good.

• The main reason why Poles and Germans see their relations as good are the similar economic interests of both countries (54% of Poles and 42% of Germans). The second reason given are the efforts and actions of public authorities and citizens to promote reconciliation between Poles and Germans. Germans give this answer twice as often as Poles (27% and 14%).

• Half of the respondents who claim that Polish-German relations are bad believe this is a result of the policy of the Polish government towards Germany (49% of Poles and 52% of Germans). Twelve percent of respondents point to the countries’ difficult historical experience.

• Poles and Germans agree (64% and 65%, respectively) that in the countries’ mutual relations, the focus should be mainly on the present and the future and not on the past.

• In the opinion of the Poles and Germans surveyed, Germany is more successful in tackling the effects of the coronavirus crisis. This is the view held by 38% of Poles and 43% of Germans.

For more please read the German-Polish Barometer 2021 or visit the webpage barometr-polska-niemcy.pl or deutsch-polnisches-barometer.de