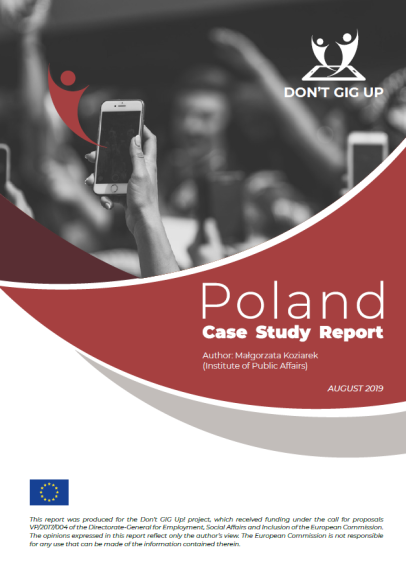 Download
This paper is one of the Country Case Study Reports of the ‘Don’t GIG up!’ project, co-funded by the Directorate-General for Employment, Social Affairs and Inclusion of the European Commission, and aimed at improving expertise and knowledge on the role unions and social dialogue can play with regard to the protection of gig workers.

The first phase of the action was dedicated to the drafting of a State of the Art Report, a document providing an overview of the political, social, and academic debate on the gig economy and its features, as well as of relevant reforms and data in the countries covered by the project, namely: Germany, France, Italy, Poland, Spain, and Sweden. The report was followed by case study analyses (available from: http://www.dontgigup.eu) investigating and assessesing practices meant to organise gig workers and to increase their employment and social security rights .

This study analyzes the working conditions in Poland within two types of services provided via on-line platforms: taxi passenger transport and restaurant food delivery, as well as provisions introduced by the legislator to regulate the operation of “intermediaries” such as Uber in the transport sector. The data for analysis was collected at the turn of 2018/2019 and updated in May 2019.