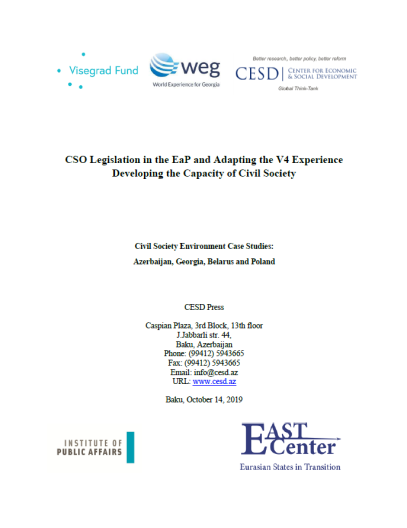 CSO Legislation in the EaP and Adapting the V4 Experience. Developing the Capacity of Civil Society

Download
Understanding the role of CSOs in any country requires an appreciation of the civil society phenomenon in general. While there is no consensus on a single definition of civil society among scholars, it is assumed by the majority that civil society represents the third sphere after the state and market. Although the civil sphere is categorized as a distinctive part of the societal system, the interests, ideals, and aspirations of this sphere cover all aspects of life.

The basic premise is that "citizens should be able to freely choose and pursue their individual life projects as connected to the existence of a vibrant set of groups and organizations independent of the state" and "these associations constitute arenas in which individuals can express and pursue different interests, identities, and aspirations."

When it comes to its strict definition, there is a wide range of explanation in literature. Generally, as mentioned above, civil society is distinct from the state. For instance, John Keane holds that "contrasted with government, civil society meant a realm of social life – market exchanges, charitable groups, clubs and voluntary associations, independent churches and publishing houses – institutionally separated from territorial state institutions." Larry Diamond describes civil society as "the realm of organized social life that is voluntary, self-generating, (largely) self-supporting, autonomous from the state, and bound by a legal order or set of shared rules". Also, Diamond argues that "for expressing their interests, passions, and ideas, exchange information, achieve mutual goals, making demands on the state, and holding state officials accountable" civil society implies "acting together collectively in a public sphere". As can be seen above, apart from the state, the notion of civil society excludes the private sphere, meaning individual and family life are not in the field of the civil sector's activities. One of the notable scholars in civil society studies Robert Putnam, similarly eliminates kinship ties from his definition of civil society as these "vertical bonds of authority" cause people to look inward toward their own family rather than outward toward society as a whole."