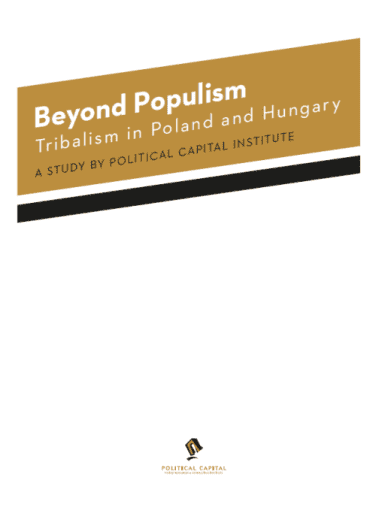 Beyond Populism. Tribalism in Poland and Hungary

Political Capital presents its report aiming to better understand, raise awareness of and respond to populism in Poland and Hungary. Together with our partners from Poland, the Institute of Public Affairs, we conducted research on the drivers of deep social and political divisions, and we organized activities with civil society and disenfranchised populations. Social and political polarization is one of the gravest threats to liberal democracy in Central Europe and the existence of the European Union. While divisions are primarily driven by political actors, social attitudes might also help us understand the state of democracy in these two countries.

In our report, which is the first of its kind, we tried to reveal the “demand side” of populism. We wanted to examine how populist politicians in power can do the magic trick: mobilizing their electorate with anti-elite messages while being the political elite themselves? How can they keep their voter bases happy and who is resonating with their way of governance? And what can be the broader, long-term impact of their policies?

We started to research populism, but we found something more malevolent and dangerous: tribalism – an authoritarian, anti-pluralistic approach to politics that can turn violent as well. Tribalism strongly undermines democratic processes, as it makes following the leader of the tribe and defeating the other tribe almost the only goal of politics. It undermines political debates and puts reality in parenthesis. While it seems to be more of a zeitgeist than only a regional phenomenon, tribalism can be especially destructive for democratic institutions in Central and Eastern European countries, where democratic institutions are young, fragile and democratic norms are weaker.

What do our results tell us about populism in Hungary and Poland?