Ukrainians are oriented pro-European and tend to see closer ties with Russia negatively. They want to avoid the Russian-Ukrainian conflict becoming a global one.

Ukrainians do not expect Western countries to send their soldiers to Ukraine. The pro-European orientation is combined with expectations that Ukraine will profit from closer relations with the EU economically and on the international stage
Ukrainians hope to receive humanitarian help for refugees and economic support. They also support tightening or maintaining sanctions imposed towards Russia by the EU. Awareness of what ”Europe” or ”being part of Europe” means needs to be strengthened.
In general Ukrainians positively asses Western policies towards the Russia-Ukraine conflict.
These are, in a nutshell, the most important results of a survey conducted by IPA and Bertelsmann Foundations. The report from the survey was on 14th October at the conference organized by IPA and European Commission delegation in Warsaw.

Ukrainian society is in favour of a pro-European course for its country. Just like three years ago, currently (in 2015) half of Ukrainians (51%) support their country’s accession to the European Union. However, the percentage of people who are more favourably disposed towards the model of integration proposed by Russia – the Eurasian Union – has decreased by half. This integration direction is currently supported by 17% of respondents.
However, there are certain differences among the respondents. The older ones are much more sceptical towards the European integration.
Ukrainians support joining NATO by their country. Among those who would take part in a referendum on that, two thirds would support the NATO-membership.

Ukrainians notice advantages of moving closer to the European Union. They claim it is in Ukraine’s interests (57%), will strengthen the international position of the Ukrainian state (59%) and its economy (56%). They think at the same time that deepening the relations between Ukraine and the European Union is consistent with the European Union’s interests (53%).  Internal and external problems of the EU has been noticed in Ukraine, which is visible in the fact that during the last two years the conviction of positive results of moving closer to the EU is fallen, in the most cases around dozen or so percentage points. However, this decrease is not a result of an increase of the negative answers, but an increase of the group of people who cannot asses this issue.
Even higher decrease one can observe in answer concerning deepening of relations Ukraine’s with Russia. The percentage point has fallen down here from 17 to 39. Here higher are not only the numbers of undecided respondents but also the group of those who have negative opinions on moving closer to Russia. In all cases negative opinions are more often that the positive ones.
Ukrainians are divided in their opinions if their country has moved closer or away from the European Union. The biggest group of respondents claim that Ukraine neither has moved closer to the EU, nor has it moved further away (44%). The other answers are chosen by a similar number of people – 21% think their country moved closer to the EU and 23% that it moved away.

Half of the Ukrainians make Russia responsible for the current conflict with Russia (49%). One third claim both countries are responsible (33%) and 9% think Ukraine is responsible.

Half of Ukrainians rate the policies of Western countries towards the Russia-Ukraine conflict highly. Positive opinions clearly outweigh the negative ones, but there is also a relatively large percentage of persons who are undecided (about one-fifth of respondents). Polish activity (57%) is most favourably perceived, followed by that of Germany (52%), the EU (51%), and the United States (46%).
Ukrainians strongly support sanctions imposed on Russia by Western countries. In total, two-thirds of respondents want a tightening (50%) or maintenance (15%) of the current sanctions. A clear minority are in favour of easing (6%) or lifting sanctions (8%), but as many as one-fifth of respondents do not have an opinion on this matter (21%).

The type of support that is expected most from the EU and its member states (by respondents) is humanitarian aid for refugees (75%) and economic aid (73%). Over half of respondents also expect the lifting of visas (56%) and the sending of military equipment to eastern Ukraine and the training of the Ukrainian army (55%). Only one in three respondents would like Western countries to send their troops to Ukraine.

The survey was commissioned by the Institute of Public Affairs and Bertelsmann Stiftung and carried out by the Ilko Kucheriv Democratic Initiatives Foundation and the Razumkov Analytical Center, between July 22 and 27, 2015 as a face-to-face survey among 2011 Ukrainian adults.


We ecnourage you to read the full version of the report J. Kucharczyk, A. Łada, Ł. Wenerski, Ukrainian look to the West - policy assessment and expectations 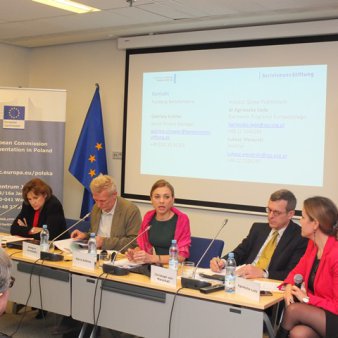