The Eastern Partnership - results and prospects

What is the evaluation of the Eastern Partnership in Ukraine, Belarus and other Eastern European countries? What are the expectations regarding this initiative? Which activities are the most and the less appreciated? This questions were discussed during the conference “Two years of the Eastern Partnership – results and prospects”, organized by the Institute of Public Affairs, Heinrich Boll Foundation in Warsaw and the Stefan Batory Foundation.


The conference was attended by the representatives of the public administration, the EU institutions, experts from Easter European think-tans as well as journalists.

The event was held on June 8 and took place in the Stefan Batory Foundation office. It was divided into three panels devoted to the future development of the Eastern Partnership, the EaP Civil Society Forum as an instrument of democratization and visa - liberalisation regime. Dr Jacek Kucharczyk and Elżbieta Kaca from the Institute of Public Affairs were involved in the panel discussion.

During the conference actions taken in the framework of the Eastern Partnership were evaluated. Panelists were discussing the effectiveness of the EaP initiative and necessary reforms which should be included in the Polish EU Presidency programme. Borys Tarasyuk, member of the Ukrainian parliament (former MFA of Ukraine) has underlined the fact that the debate concerning the idea of the EaP has not finishet yet and its main aims still nedd to be precised. In his opinion, the effectiveness of the initiative depends on funding increase and active involvement of all interested parties.

Iris Kempe, speaker in the second panel (from the Heinrich Boll Foundation in Georgia) stressed that the EaP should not be seen as a local but European initiative. It can be done only when more countries will participate in the initiative (e.g. Russia and Turkey).

The conference gave also a chance for discussion between the panelists and other guests - it was an opportunity to comment and precise some important issues. 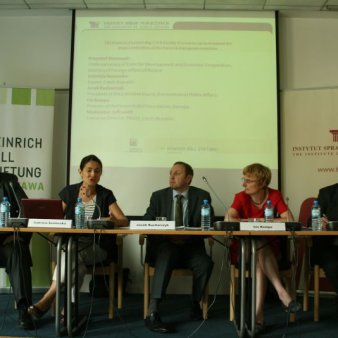