The Dangers of Smog And How to Tackle Them

On the evening of February 9th, a public forum was held to discuss the issue of smog here in Poland and what can be done to remedy the situation that we currently face. We hope that this event helped to encourage individuals to be more proactive in reducing their own carbon footprint and contribution to smog and provided policy makers with additional insight into the problem that smog poses to the people of Poland.


The forum was open to the public – anyone was welcome to attend.  In addition to local concerned citizens, we invited the following experts:

The forum was moderated by Magdalena Sklodowska, TVN24 BiS and ecology blogger.  Roughly 200 people attended the event in person and thousands more watched it online.

The moderator opened the event with a discussion on the current state of Poland in regards to air pollution.  Ms. Sklodowska described the need for immediate action, but that there were no quick and easy remedies to the problem of smog as smog has its roots in (1) the production of electricity, (2) heating of homes and (3) transportation – all essential functions.  She stated that Poland’s reliance on fossil fuels, specifically coal, stems from the energy crisis in the 1970’s; meanwhile in Sweden they had responded to the energy crisis by moving towards renewable engery.  This comparison was made in order to illustrate the differences policies have on the issue of air pollution.

The floor was then given to Joanna Mieskowicz who discussed her personal experience with air pollution in Krakow, the reasoning behind why she is considered an eco-refugee and the success of her organization Fundacja Aeris Futuro.  She discussed how becoming a mother acted as a catalyst for her to move to Zakopane as an eco-refugee in an attempt to live where the air is clean.  Ms. Mieskowicz also detailed the work that her foundation has done and the work that still needs to be done in order to create a world where citizens can breath fresh, clean, healthy air.

Prof. Andrzej Szarata then presented his research on air pollution and the factors causing smog.  Prof. Szarata’s focus on the cause of air pollution was the role that private individuals have in causing smog.  He discussed how the private individual can make a difference by using public transportation as opposed to their own private cars, the private citizens’ burning of trash when it came to heating their homes, emissions controls on private cars and even the speed at which people drive on roads and how it effects the particulate matter in the air.  Another point that he brought up was the fact that many cities are located along rivers and therefore in valleys.  Valleys naturally trap air.

This lack of air flow contributes heavily to smog, so Prof. Szarata discussed the need for „artificial flushing” of air throughout cities by creating corridors for streams of air to circulate through the city.  Finally, in regards to the contribution that private cars make to the creation of smog, he discussed the benefits of banning cars from main thoroughfares in the city center, lowering speed limits, street cleaning, etc.

From there the panelists, drawing upon their respective areas of expertise, answered questions from the moderator.  Questions regarding why smog is being addressed now given the history of air pollution in Poland, how did Germany and Sweden reduce smog in their respective countries, what roles do local authorities have in combatting air pollution and how local laws can work within EU mandates on clean air and emissions.

Once these topics were discussed by the experts, the audience had an opportunity to chime in with their questions for the panel.  The audience asked about how Poland, with an economy so reliant on coal, could work to improve the air quality without harming the GDP; in response to the panel placing an emphasis on individual responsibilty, the audience had questions about the enforcement of regulations on industry; the panel was questioned about how banning cars from the city center, fees to drive on city roads, etc. would work within the context of Warsaw and the legality and efficacy of such measures; the role that the development of closely spaced buildings have on air flow and the potential to effect the development of smog in a city; and finally the subsidy for replacing coal-burning furnaces with cleaner gas-burning ones in certains sectors of Warsaw, such as Praga, and if the city would also be providing the gas lines to these buildings.

The public forum was highly successful in terms of the level of turn out and the level of engagement displayed by both the panelists, the audience and the public at home. Going forward, we hope that this event helped to encourage individuals to be more proactive in reducing their own carbon footprint and contribution to smog and provided policy makers with additional insight into the problem that smog poses to the people of Poland.

The event was organised by the IPA in the co-operation with the Friedrich Ebert Foundation and the Sewdish Embassy in Warsaw. It was co-funded by the European Parliament. 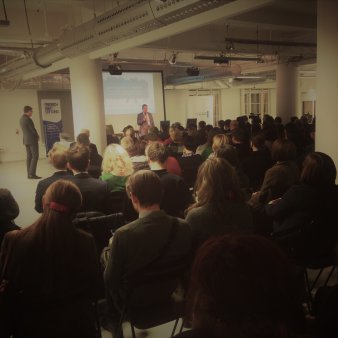