Headquarters of the European Foundation for Democracy in Stambul? Why not. We discussed bringing the new institution into existence on the experts’ seminar at the IPA on Wednesday (05.10.2011).

Polish Presidency has a chance of bringing into being a new institution for supporting democracy. After repressions in Belarus from the beginning of the year and the outbreak of the Arab Spring, Europe has remembered how important it is to support democratic changes around the world.

EU has been promoting democracy for decades by its enlargements, but that possibility is slowly coming to an end. Krzysztof Stanowski, the vice-minister of foreign affairs, said that we’re not going to propose membership to Tunisia nor Libya. We have to find new instruments. Could that be the European Foundation for Democracy?

As former Czech diplomat, Gabriela Svarovska described, the process of strengthening democracy was being supported during the Czech Presidency. However Prague’s action was focused more on reforming hitherto institutions, such as the European Instrument for Democracy and Human Rights (EIDHR).

In Poland’s opinion it would be more effective to bring into existence a new, less bureaucratised and more flexible institution. Minister Stanowski said that the work on the text of a new convention, that is supposed to be the base for this new institution, has already begun. The convention would have to be signed by the EU and at least 10 Member-States. It would also be available for the Candidate Countries – which is the reason for suggesting to make Stambul the headquarters of the Foundation. It would emphasize its open-ended and global character.

President of the IPA, Jacek Kucharczyk, and the director of the Czech think-tank Europeum, David Kral, brought up aspects that have to be discussed and dealt with before the new institution starts working. Is it supposed to be functioning only in the European area or maybe worldwide? How is it going to be financed? How to make it flexible? Will it be supporting financially political parties? Will it be able to give structural grants? What will be its position in EU’s current structure of institutions that focus on that subject? All of these questions have to be answered by the experts who work on the text of the convention. The Ministry of Foreign Affairs assures that it will be ready by the end of Polish Presidency.

The seminar “Strengthening EU democracy support as a task for Czech and Polish Presidencies” was organized in the context of the Polish-Czech Forum at the IPA on October 5th 2011. 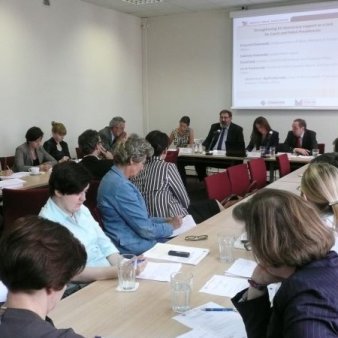