Research and Debate: There is a consensus that the energy market in the European Research needs reform, but countries define different priorities

The conception of the Energy Union, presented in spring 2014 by then Polish prime minister, Donald Tusk, met with varied reception. Its adoption by the new European Commission as one of the leading themes for the coming years is an indication that at the same time this project will be an important area around which negotiations will take place in the coming months.

As usual in such cases, various interested circles in the Member States have taken positions on this project, and have also assessed the potential stances of other countries in the EU – sometimes guided by conjecture, stereotypes, or on the basis of fragmented, incomplete information. In order to get a broader picture of the real views of entities influencing energy policy in given countries and to show the similarities and differences that exist in this field between Member States of the EU, the Institute of Public Affairs from Poland together with the Genshagen Stiftung from Germany, and in consultation with experts from France and Great Britain, implemented a research project presenting the opinions of members of political, economic/business and scientific elites from France, Germany, Poland, and Great Britain on the subject of the Energy Union and the potential for cooperation between countries of the EU in this field.

The research of the Institute of Public Affairs indicates that connected problems with energy are building active interest in Europe.  Polish respondents place the greatest importance on the issue of energy dependence from abroad. They hope that the realization of the current energy project from the European Union will bring solutions that strengthen Member States in negotiations with gas deliveries, mostly with Russia, and streamline procedures on sudden incidences in deliveries. The development of connections between gas networks of the EU Member States has to ease the transnational transportation of gas and at the same time increase energy security and boost competition on the market. The Polish idea of creating mechanisms for the mutual purchase of gas for all of the EU, however, will not obtain approval from all of Eastern Europe. This proposition is perceived as a departure from free market principles.

In France, Germany and Great Britain, the main issue is a functioning internal energy market. Respondents in these countries wish to fully implement the Third Energy Package, which contains guidelines to ease the dealing of energy. It also brings attention to the need for a large coordinated strategy from individual members to make sure that operations undertaken in one country will cause no disturbances in their neighbors’ energy market. The proposed synchronization of countries that have subsidized energy production systems for renewable energy, and also common regulations touching on the assistance of producers of conventional energy, whose task is the assurance of the consistent delivery of energy in a moment – taking into account weather conditions –may not produce renewable energy. Representatives from mid-sized economies claim that high energy prices in the European Union and exact environmental standards will assure that the industry will move to other parts of the world, which can seriously damage the economic conditions of the Union.

In Western Europe emphasis is on the close connections between energy and climate politics. France, Germany, and Great Britain are leading the need to continue efforts in reducing CO2 emissions. Therefore, they are planning the development of renewable energy sources as well as – for example, in France and Great Britain – nuclear energy. Emphasis is also placed on the importance of gas, as fossil fuels generate less greenhouse gas emissions than coal. In turn, coal is generally referred to as a raw material whose participation in the energy mix must be reduced. Polish conversation partners emphasize the high costs of an ambitious climate policy, particularly in countries such as Poland that are dependent on coal and do not have a large potential for the development of renewable resources. They also mention that accepted climate commitments from the European Union should be relative to the actions of other world powers.

During the debate organized with the Representation of the European Commission in Poland, the research results were presented and thought was given on to what extent the differences in energy policies divide Europe between East and West. Some voiced the opinion that divisions, if analyzed in some aspects, are formed between “Poland and the rest”.  However, taking into account many dimensions, exactly how climate energy policies are covered speaks many lines of division. The representatives of Polish administrations, Adrain Kondaszewski from the EU Economics Deparment in the Ministry of Foreign Affairs and Elżbieta Wróblewska from the Energy Department in the Ministry of Economy emphasized how many Polish demands from the primary concepts of the Energy Union, contrary to earlier fears, have been fulfilled.

The invited experts from the other three countries surveyed - Severin Fischer from SWP in Berlin, Jonathan Gaventa from E3G in London, and Carole Mathieu from IFR in Paris - brought up concerns about the different levels where discussion about the Energy Union is conducted. Political aspects are engaged pragmatically, whereby solutions that have the nature of being purely organizational can also take a long time to be implemented. Hence, for example, the possible regulation of industries that further integrate the Energy Union on a European scale, although technically possible and often desirable, will be the subject of further discussion.

More in the publication: A.Łada, M.Sklodowska, M.Szczepanik, Ł.Wenerski, The Energy Union from the Perspective of France, Germany, Poland, and Great Britain, Institute of Public Affairs, Warsaw, 2015


The publication and the event in Warsaw was implemented under the project: “The Energy Union – the Perspectives of France, Germany, Poland, and Great Britain” produced in cooperation with the Genshagen Foundation and the Representation of the European Commission in Poland and the financial support of the Foundation for Polish-German Reconciliation and PKN Orlen. 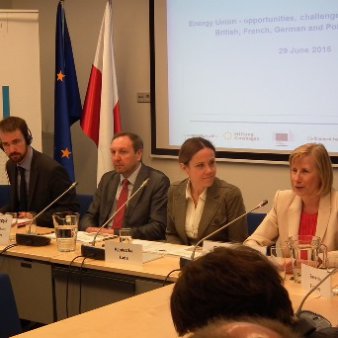 The Euro and Poland