pl en
Poles and Germans support the admission of Ukrainian refugees, arming the Ukrainian army and sanctions against Russia

Poles and Germans support the admission of Ukrainian refugees, arming the Ukrainian army and sanctions against Russia

After Russia commenced military operations against Ukraine, Poles and Germans show solidarity with the Ukrainians and support their governments' actions aimed at helping Ukraine and stopping the Russian aggressor.


As shown by the survey from the beginning of March, carried out as part of the cyclical “Polish-German Barometer” project, compared to the survey conducted just before the Russian attack, support for the fighting Ukrainians and the feeling of being threatened by Russia have increased significantly in both countries. In Poland, similar attitudes prevailed even before the start of hostilities, while in Germany there was a significant change after the outbreak of the war.

Chart: Are you afraid that Russia may pose a military threat to your country in the future? Affirmative answers of Poles and Germans in 2005, 2008 and 2015 as well as in February and March 2022 (in%) 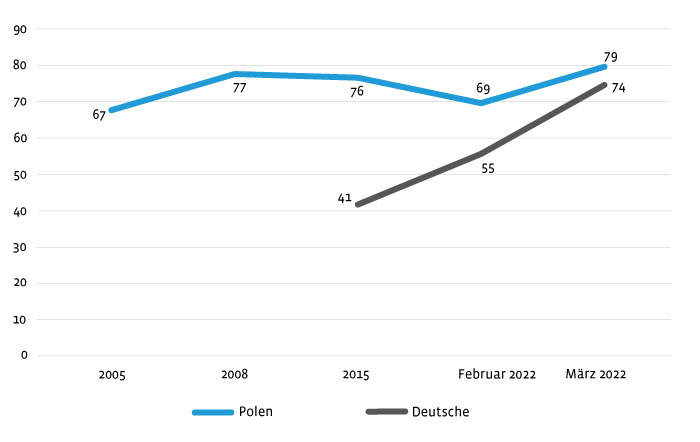 Most Poles (58%) and Germans (55%) agree that increasing spending on the German army will strengthen Poland's security. The percentage of respondents declaring such a belief has increased compared to the results of the survey from 2021 and 2018.
Almost 90% of Poles (87%) and two-thirds of Germans (67%) believe that Russia is a country that cannot be relied on, so both countries should become independent of Russian energy supplies.
Poles and Germans strongly support the actions taken by the governments in response to the Russian attack on Ukraine. The greatest support in both countries is for the imposition of economic sanctions on Russia and the admission of refugees.

Chart. In response to the Russian attack on Ukraine, the Polish and German governments took many steps. Please indicate whether you support or not the following decisions and actions. Affirmative responses of Poles and Germans in March 2022 (%) 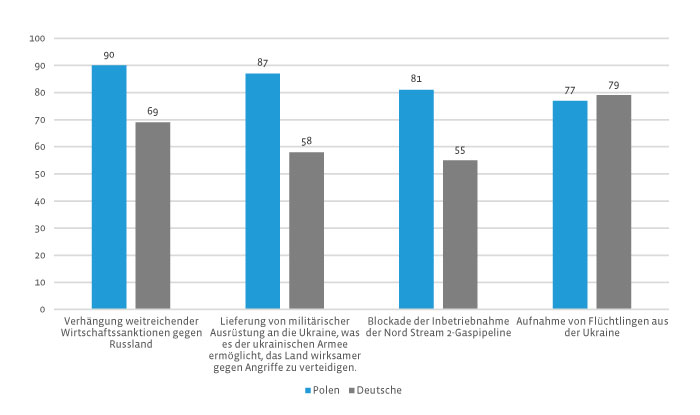 
In Poland, from February 2022, support for sending arms to Ukraine increased the fastest, and in Germany - for admitting Ukrainian refugees.

As a result of the attack on Ukraine, there has been a clear change in the German public opinion in its approach to Russia. We see it in each of the issues covered by the research, from the sense of threat from Russia, through the support for the demands for independence from Russian energy supplies or giving up Nord Stream 2. Even in such a controversial issue as sending weapons to Ukraine, the German public opinion is now in favour

comments the report's co-author dr Agnieszka Łada-Konefał from the German Institute of Polish Affairs in Darmstadt.

Reactions to the Russian attack on Ukraine in Poland are independent of the political sympathies of the respondents. This is a completely unique situation because Polish society is generally deeply polarized in almost all important political and social issues

Polish and German reactions to Russian aggression are characterized by an unprecedented convergence of public opinion in both countries, mainly due to a rapid change in the German public opinion

says dr Jacek Kucharczyk, co-author of the study, a sociologist from the Institute of Public Affairs.

The research was carried out as part of the Poland-Germany Barometer series at the request of the Institute of Public Affairs, the German Institute of Polish Affairs, the Konrad Adenauer Foundation and the Foundation for Polish-German Cooperation using the CAWI method (using an internet panel) on a representative group of a thousand inhabitants aged 18-75 by KANTAR PUBLIC from February 14 to 22, 2022, and then repeated on March 4 to 8, at a time when intense hostilities were taking place.

Dr Jacek Kucharczyk, President of the Board, Institute of Public Affairs, jacek.kucharczyk@isp.org.pl,

The European Civic Forum condemns the Russian attack on Ukraine