We are happy to announce that Ilko Kucheriv Democracy Partnership Programme was granted to Oleksii Sydorkuch. As a Fellow of this programme Mr. Sydorchuk will spend five weeks in the Institute of Public Affairs’ office working on a research project. Furthermore, six months cooperation and mentoring of IPA’s analyst will be provided.

IPA is among hosting institution, responsible for co-organising the Fellowship together with PASOS and the Ilko Kucheriv Democratic Initiatives Foundation DIF. The Program targets professionals at independent democracy and human rights advocacy NGOs and think-tanks from the CIS region and seeks to assist the advancement of democratic practices in transitional democracies.

The fellowships will focus on specific democratic transformation issues, such as media freedom, constitutional law, parliamentary democracy, judiciary, public opinion research, electoral processes, free and fair elections, building democratic awareness. Fellows will work with the hosting institute for a six-month period on project co-operation and mentoring, and spend up to five weeks in the office of the hosting think-tank. Fellowships will also provide one-on-one, hands-on training with the host institute’s expert as mentor. The goal is to provide a mentoring opportunity for an in-depth, on-site, and interactive experience in democratic transformation and protection of human rights.

Oleksii Sydorchuk choosen as a Fellow by IPA will undertake a research project on the Impact of Semi-Presidentialism on Democratic Consolidation: the cases of Poland and Ukraine. The research will use the theoretical framework of comparative government studies. The research will touch upon the similarities and differences of semi-presidential regimes in Poland and Ukraine on the levels of normative framework and practical implementation.

The fellowship program is named after Ilko Kucheriv, a prominent activist in the Ukrainian civil-society movement who succumbed to cancer last year.

“Kucheriv worked to unite journalists, political analysts, politicians, diplomats and civil activists with radically different views through civilized discussion of the most poignant topics and problems in society,” said Jeff Lovitt, executive director of the PASOS secretariat in Prague. “He aspired to make DIF a powerful analytical center that would produce original research and training programmes, and have an impact on politicians and public opinion across a broad spectrum of issues, including rights, security and democratic freedoms and processes. Our intention was to honor his ideas and actions with this programme so that others may take up his campaign for a civil and open society.”

Kucheriv was the founder of the DIF and personally contributed a great deal to the advancement of democratic ideas in Ukraine. In the early 1990s, he understood the importance of public opinion for the development of a civic society, and DIF was the first organization to make available the results of social research to the broader public and to train journalists in understanding public opinion polling.

The pamphlet about the life and ideas of the foundation’s namesake can be downloaded in PDF format here.

The fellowship program was made possible with the financial support of the National Endowment for Democracy (NED). 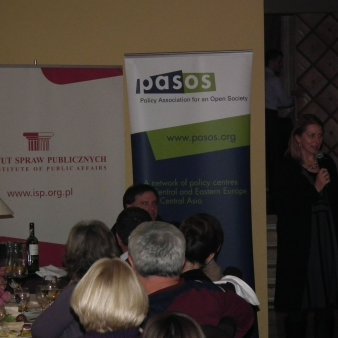