Egyptian researchers on training at the IPA

Last week the IPA hosted a group of young researchers from Egypt. They participated in a series of meetings and trainings about Polish democratic transformation. Last Tuesday they met with the Speaker of the Senate Bogdan Borusewicz.


Egyptian researchers came to Warsaw within the project co-financed by the Ministry of Foreign Affairs of Poland. They met democratic opposition activists, experts and people who have played a key role in building democracy in Poland.

They met with Krzysztof Stanowski, former deputy minister of foreign affairs and education, and prof. Mirosław Wyrzykowski, former judge of the Constitutional Tribunal. They had  an opportunity to talk about the civil control over the army with Janusz Onyszkiewicz and about special services with Piotr Niemczyk. Some of our guests co-created new Egyptian political parties, therefore they met with young leaders of Polish parties. What is more, they were trained in analytical work during special training designed by Piotr Kaźmierkiewicz, experienced IPA researcher.

Throughout the visit  IPA aimed to both support young researchers in their job or studies and promote Polish transformation experience. This visit was not the first Egyptians’ visit to IPA. In January we hosted a group of young representatives of Egyptian political parties established after the fall of the Mubarak regime. 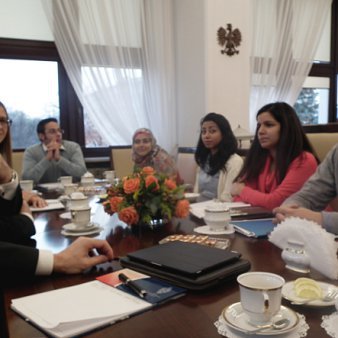