‘It is now about promoting democracy, but really supporting it’ said deputy minister of foreign affairs Krzysztof Stanowski during the conference “Democracy, Partnership and Enlargement” organized by the Institute of Public Affairs and PASOS on 25 November.

During the conference 170 experts, decision-makers, politicians and democratic activists from the Western and Eastern Europe, Balkans and North Africa discussed about democracy, situation on the East, Arab spring and the role of new media in democratic revolutions. The conference was opened by Jacek Kucharczyk, President of the Executive Board of IPA.

‘One has to admit that the situation in the world is completely different than a year ago, when Poland planed its EU Presidency. During this year we witnessed first intensified repressions in Belarus and then the Arab Spring’ said minister Stanowski. He underlined that the European Union has to involve itself more in supporting democracy in the Eastern Partnership and North Africa counties. ‘It the past if only promised EU membership, the candidates were starting to comply with the standards and introducing reforms. So far the EU has mainly reacted to particular human rights violations. But, if concentrating only on individuals, we will not improve the situation in Belarus. Both types of involvement are needed’.

Minister Stanowski also described the concept of European Endowment for Democracy, which is to be established as an instrument of supporting democracy outside the EU. ‘We hope for important decisions to be taken on the 1st December Foreign Relations Council. The Endowment will support democratic activists, democratic institutions and political movements. Good example of such activities are the political foundations in Germany’ said Stanowski.

Peter Balazs, also present at the conference, director of the Center forEU Enlargement Studies and former Hungarian minister for foreign affairs, explained, why the Eastern Partnership Summit did not take place, as planned, in Budapest during Hungarian EU Presidency. ‘Firstly, Hungarian prime minister was not interested in the Presidency at all. Secondly, no one expected it to be a success’.
Finally, the summit was organised in Warsaw in September. ‘Polish diplomacy gave propel signals about current incidents. Obviously, that is a shame, that there was not joint declaration towards Belarus of EU member states and Eastern Partnership countries’ said Balazs.

Eastern Partnership was also an issue of the speech of Andrzej Cieszkowski, plenipotentiary of EaP in the Ministry of Foreign Affairs. ‘Eastern Partnership is a two-way street’, he explained. ‘It depends not only on the will of the EU, but also on the involvement of the Eastern partners’.

More sceptical about the EaP was Boris Tarasiuk, former chief of the Ukrainian Ministery for Foreign Affairs, member of Ukrainian Parliament. ‘Establishing the Eastern partnership was a move in the right direction. But this initiative exists only on paper’. On the other hand, he praised Poland for its activities in Ukraine. ‘Poland is more involved in solving Ukrainian problems, that Ukrainian authorities’ he said.

New online tools and their role in promoting democracy as well as liberalisation of visa regimes were also discussed at the conference. 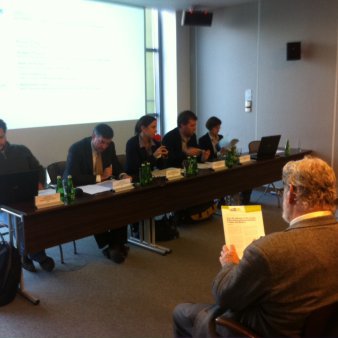