Marcin Waszak, the IPA expert, in response to the invitation by the Institute for Public Affairs (IVO), took part in conference organized in Bratislava in 12.09.2012 as one of the panelists within the framework of project .


Ambassadors, diplomats, journalists and scholars participated in the discussion, held in library of the Slovak Foreign Policy Association. During the first panel new political parties and their impact on current politics with reference to examples from Poland, Czech Republic and Hungary were discussed. In his speech Marcin Waszak considered origins of Palikot’s Movement success in Poland and question about real profile of this formation in alternative parties context. The second panel focused on Slovak examples of anti-parties and their voters.
The conference announces release of English publication dedicated to alternative political parties in Central Europe in April 2013. The publication will contains also article prepared by Marta Gałązka, Marcin Waszak and dr Jarosław Zbieranek as a scientific analysis concerns Palikot’s Movement, new political formation in Polish system of political parties.

See more:
Anti-politics as a prescription for the electoral success in Poland? The case of Palikot’s Movement  >>>
Relation from the conference placed on the Institute for Public Affairs website >>> 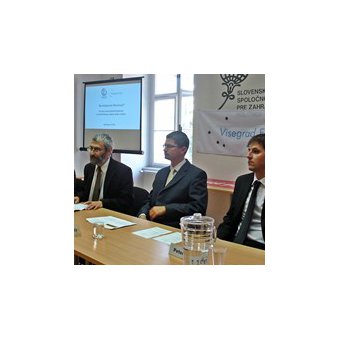